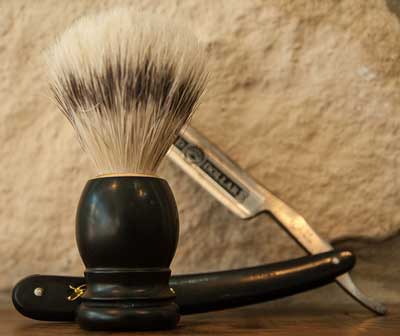 In the original version of the tale, Sweeney Todd is a barber who dispatches his victims by pulling a lever as they sit in his barber chair. His victims fall backward down a revolving trap door into the basement of his shop, generally causing them to break their necks or skulls. In case they are alive, Todd goes to the basement and “polishes them off” (slitting their throats with his straight razor). In some adaptations, the murdering process is reversed, with Todd slitting his customers’ throats before dispatching them into the basement through the revolving trap door. After Todd has robbed his dead victims of their goods, Mrs. Lovett, his partner in crime (in some later versions, his friend and/or lover), assists him in disposing of the bodies by baking their flesh into meat pies and selling them to the unsuspecting customers of her pie shop. Todd’s barber shop is situated at 152 Fleet Street, London, next to St. Dunstan’s church, and is connected to Mrs. Lovett’s pie shop in nearby Bell Yard by means of an underground passage. In most versions of the story, he and Mrs. Lovett hire an unwitting orphan boy, Tobias Ragg, to serve the pies to customers.  Though a gruesome tale, it contains powerful lessons on the futility of revenge.  Because this production is taking place in a church, the spilling of blood will be left to the viewer’s imagination.

On this day please pray for the wisdom of our new leaders to guide our country to a new peace and unity.
#inaguration #inaguration2021 ...

There will be a produce give away at the Shaker Heights Public Library today from 11:00 am - 12:30 pm in honor of MLK Day. Please share this information with anyone you know who is suffering from food insecurity. ...

Our Martin Luther King Day of Service will begin soon at 9:30 AM, help us honor the legacy of Dr. King and participate in this reimagined day of service. We will all gather on Zoom to hear prayer and reflection, an inspirational word from Pastor Burris, and to receive directions for the activities of the day.
After our 30-minute Zoom connection, each person will be asked to contact people (church members, neighbors, friends, and/or family members) who are in isolation or need a word of encouragement. You may call, send a card, text, or email to make contact. The goal is to make connections and establish bridges to offer support and create unity in our community.
Each participant is encouraged to identify a charity/organization that they feel makes a positive impact on the community. Prior to joining the call, please share the name of your charity of choice with Rev. Sandra Alexander through the form below. At the end of the day, through a drawing, there will be an opportunity for everyone who participated to receive a donation designated for their charity of choice.
Join our Zoom MLK Meeting
zoom.us/j/95481897071...
Meeting ID: 954 8189 7071
Passcode: 364670
If you would prefer to dial-in, use one of the following numbers:
+1 312 626 6799 US (Chicago)
or
+1 929 205 6099 US (New York)
Meeting ID: 954 8189 7071
Passcode: 364670
More Info > firstbaptistcleveland.org/mlk-day-of-service ...

Coming in a few moments -live stream! Join us and Share! ...

In this morning's message, Mr. Ship Collins will talk about "Honoring a Dream: My Role and Yours" in honor of Martin Luther King Jr. Day. His scripture is 1 ...
View on Facebook
·Share

Our Livestreamed Worship Service will be starting soon at 10AM and we would love for you to join us. www.youtube.com/channel/UCGPcB14N9TRe50jES6uHK7Q/live
In this morning's message, Mr. Ship Collins will talk about "Honoring a Dream: My Role and Yours" in honor of Martin Luther King Jr. Day. His scripture is 1 Corinthians 14:10. The service features a blend of musical styles, from traditional with organ to contemporary music with a praise band and singers. Alona Miller will play "Dear Theodosia" on her guitar for the prelude. ...