Angela Zawada, Soprano presents a solo recital accompanied by Adam Whiting to benefit the Music & Fine Arts program at First Baptist Church. Angela, currently studying with Richard Anderson, will present music by Handel, Mozart, Schumann, Faure’ and Samuel Barber that vividly demonstrated her ability to show pathos, contemplation, sadness and exuberant joy, all in one evening. Included in the concert was Handel’s piece “O Sleep,” from Semele and “Piangero la sorte mia” from Julius Caesar in Egypt. A piece by Mozart lightened the mood significantly “Exultate, jubilate!” Selections from a Robert Schumann song cycle “Frauenliebe und leben” that follows the progression of a woman’s love and life. Three pieces by Gabriel Faure’ were an excellent introduction to Faure’s incredible musicality that everyone acknowledges exists in his famous Requiem. Angela closed the program with three pieces by Samuel Barber ending with “The Man I Love” made famous by Billy Holiday among others. The opening lines refer to the night and to dreams. 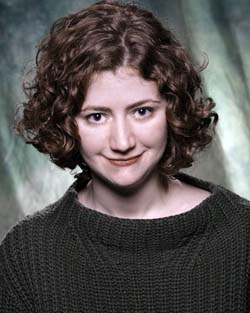 As soprano soloist at First Baptist, Angela Zawada has performed solos from works by Handel, Mendelssohn, Bach, and Saint-Saens, and participated in theater productions of Les Misérables and Evita presented by the Happy Ending Lyric Players, the resident performing arts company of the church, now in its 44th season. Angela holds a

Bachelor’s degree from the University of Notre Dame and a Master of Music degree from Roosevelt University. A recent addition to the music scene in Cleveland, she was active in the opera scene in the Chicago area with such companies as Chicago Folks Operetta, Sinfonietta Bel Canto, Katydid Productions, Main Street Opera, and Lingerie Lyrique. Angela was a founding member of and a performer with Chicago’s VOX 3 Vocal Collective which specializes in performances of art song literature. She is currently studying with Richard Anderson here in Cleveland.

Adam Whiting is a coach/accompanist at the Cleveland School of the Arts and The Music Settlement. Until recently, he was a staff accompanist at the Cleveland Institute of Music; he was hired for this position upon graduation from CIM in the spring of 2005 with a double master’s degree in piano performance and accompanying. After 15 years and purchasing 4 properties in Cleveland, he considers himself a transplant but still spends summertime in the Pacific Northwest to see family and friends and accompany the Oregon Suzuki Institute and the Japan Seattle Suzuki Institute. 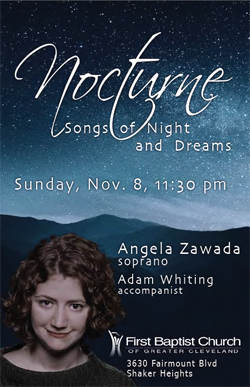 Download a PDF of the program which includes songs and lyrics.

Are you still looking at Facebook? It is time for Bible study to begin. We're waiting to see you ;-) What, you don't already know about it? Visit firstbaptistcleveland.org/get-connected/wednesdays for more information. See you soon! ...

Our Livestream Sunday worship service on our YouTube Channel will begin shortly at 10:00AM — youtube.com/channel/UCGPcB14N9TRe50jES6uHK7Q/live
Pastor Kregg Burris will deliver his message "Comfort and Joy" from Luke 2:10-11. We look forward to seeing you, be sure to say good morning in the chat! ...

December is right around the corner, do you what's happening next month? Tower Tidings is hot off the press! Take a look and get the scoop on everyone else.
www.firstbaptistcleveland.org/wp-content/uploads/2020/11/FBCCC-Dec-2020-newsletter.pdf ...

We're a few weeks away from our Spread Some Cheer Caroling event! Over the next few weeks, we'll be sharing some videos about the upcoming event on Sunday, December 20th! Join us in spreading some Christmas Cheer!

Have a safe and Happy Thanksgiving! ...