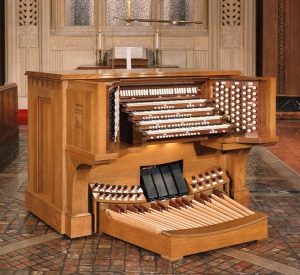 The first organ in the First Baptist Church of Greater Cleveland was built by The Austin Organ Company in 1911, moved to our present building and enlarged to four manuals in 1929. Though rebuilt again by Austin in 1954, it fell short of meeting the needs of an active music program. A two manual and pedal neo-Classic organ was added by the Schlicker Organ Company in 1970. While this addition provided tonal variety, the mechanical control over the full instrument was found wanting. In the 1990’s a new vision emerged for music at First Baptist. The acoustical renovation of the sanctuary and the redesign of the chancel enhanced the environment for worship and music. The massive organ project took shape under the ministry of Dr. Robert Schneider, Director of Music and Organist, with Timothy Edward Smith as consultant. Generous gifts enabled the creation of a comprehensive American classic organ, capable of rendering many styles of organ literature, accompanying great choral music and leading hymn singing. Southfield Organ Builders of Springfield, Massachusetts, was selected. David Melrose, President of Southfield, gave shape to the church’s vision by reusing selected voices from the previous instruments in the context of bold new principal, reed and flute choruses. Special care has been given to the placement of the organ’s various divisions to harmonize with the Gothic Deco interior. With ninety-one ranks controlled from a moveable low-profile console in the chancel, First Baptist is home to one of Ohio’s most versatile and inspiring musical settings.