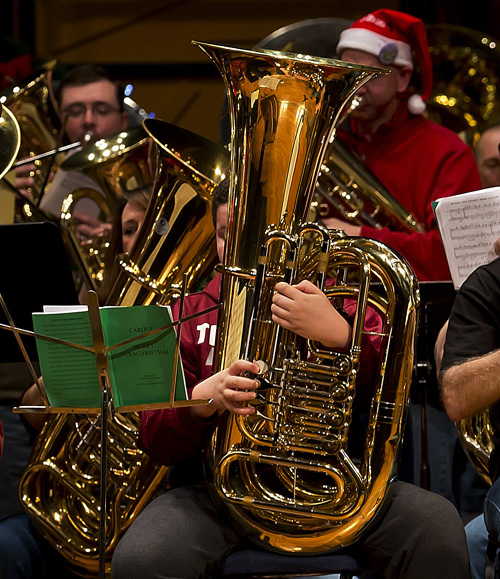 This music concert is held in cities worldwide that celebrate those who play, teach, and compose music for instruments in the tuba family, including the tuba, sousaphone, baritone, and euphonium, though some participants bring rarer members of the family such as the helicon, ophicleide, serpent and double bell euphonium.

The first Tuba Christmas was organized by Harvey G. Phillips to honor his tuba teacher William Bell, who was born on Christmas Day 1902, and was held December 22, 1974, in the ice skating rink at New York City’s Rockefeller Center; Paul Lavalle conducted. Over 300 musicians played that day, beginning a holiday tradition. This is the 5th Tuba Christmas at First Baptist Church and will feature over 50 performers.

FBC holds prayer vigils at Advent, Lent and at other times throughout the year when we want to set aside time for prayer and reflection. This year’s advent prayer vigil will take place in the Judson Room at the top of the Portico stairs. In the Judson room, you will find seasonal props, candlelight, Bibles, and devotional materials for your use. There usually will be a written guide to help direct your prayers, if needed. Some choose to bring their own Bible or devotional materials. A sign-up sheet will be available in the Fairmount hallway. People generally sign up for at least a 1-hour time slot, but you may stay as long or come as often as you like during the 24-hour vigil. Please enter through the portico entrance and take the stairs to the top or use the elevator. There may be more than one person at any given hour. If agreeable to those in the room, you may talk or pray aloud together or separately. Otherwise, silence is recommended. There will also be music CDs available if you want to use them. In general, this is a time of focused prayer and devotion; a time when you block out the busyness of your life and sit in the presence of God. You may contemplate the season or specific prayer requests of your own or as recommended by the pastors. There will be a board to write prayer requests that will be incorporated into the prayer list used by pastors and prayer team members. They will not be published in the bulletin without your permission. Many find this a wonderful time of revelation and peace.

Friday, Dec 6 at Noon through Saturday, Dec 7 at Noon in the Judson Room

Our East Side Ministry students, teen assistants, and adult teachers will join together for a Christmas party that will include refreshments, games, gifts and attending the Children’s Christmas Musical in Spahr Center. 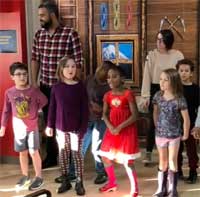 Children’s Musical It All Happened In The Country

Two kids from the city end up in the country on Christmas Eve. The city kids feel quite out of place but they are welcomed into the home of the country folks. The hospitality of the country cousins is shown with true Christian compassion along with a little humor.

Dan May and Karen Gill join the cast of twenty-five children ages three to ten who will tell the story of Jesus’ birth in this 45-minute musical production.

A Visit With Santa

Bring your little ones and take your own pics with Santa for free to share with friends and family for Christmas.
Wednesday, December 11th from 5:30 – 6:30 PM in the Spahr Center

Elizabeth Huang is a talented young violinist who has been playing in the traditional service in recent weeks. This is a student violin recital, it is free and open to the public. 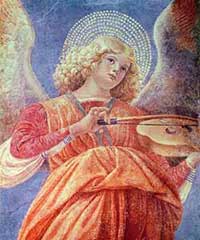 Guest conductor Julian Wachner leads his favorite selections from Bach’s holiday masterpiece, with 3 soloists and members of Apollo’s Singers and instrumentalists. Bring the kids (age 8 and up) for free! Adult guardian required. (apollosfire.org) 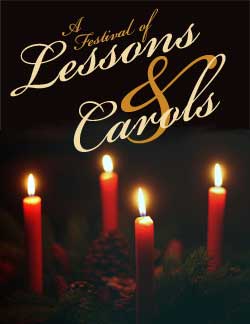 A Festival of Lessons & Carols Followed By An International Tea

In the Tradition of Kings College Chapel

The Festival of Lessons and Carols is a service of Christian worship celebrating the birth of Jesus that is traditionally followed at Christmas. The story of the fall of humanity, the promise of the Messiah, and the birth of Jesus is told in nine short Bible readings from Genesis, the prophetic books and the Gospels, interspersed with the singing of Christmas carols, hymns and choir music.

The first Festival of Nine Lessons and Carols at King’s College, Cambridge, was held on Christmas Eve in 1918. It was introduced by Eric Milner-White, the Dean of the College, whose experience as an army chaplain had led him to believe that more imaginative worship was needed by the Church of England. The order of service was adapted from the order created by Benson for Truro Cathedral 38 years earlier, which was based on an idea of George Walpole, at the time Succentor of Truro Cathedral, and the future Bishop of Edinburgh. The first service at King’s largely followed Benson’s original plan, including the Benedictions before each reading, several of which were later amalgamated by Milner-White into his Bidding Prayer.

The music at the first service at King’s was directed by Arthur Henry Mann, who was the organist from 1876 to 1929. The choir had 16 trebles as specified in statutes laid down by Henry VI, and until 1927 the men’s voices were provided by choral scholars and lay clerks. Today, 14 undergraduates from the Choir of King’s College, Cambridge, sing the men’s parts.

Join us afterward for the International Tea in Spahr Center.

The children and youth are invited to this Christmas party just for them! Breakfast and hot cocoa bar will be served in Wheaton during the discipleship hour (10:00-11:00.) Children, toddlers, and their families are invited to stay for a tie-dye craft. Youth will have games and fellowship in the Youth Wing.

Sunday, Dec. 22nd during Discipleship Hour in the Youth Wing and Wheaton Center

One of First Baptist Church’s most beloved annual traditions, our living nativity brings to life the Christmas story into our sanctuary with a large host of live animals, choirs, soloists, musicians and the newborn baby Jesus. We celebrate with traditional hymns and new selections of music, as we participate together in the celebration of the birth of Jesus.

Usher in Christmas in the traditional late evening Christmas Eve Candlelight and Carol service.  The Chancel Choir, Soloists and Handbell Choir offer beautiful music of the season and the service culminates with the singing of “O Holy Night” and “Silent Night”.

Worship together with our youth as they take part in many of the activities in this worship service.

Take refuge in the quiet. Reflect over the past year and spiritually prepare for the year to come. Brian Kozak will provide the musical talent of his acoustic guitar with times to read, pray, share and meditate. A truly sacred service culminating with communion.

On this day please pray for the wisdom of our new leaders to guide our country to a new peace and unity.
#inaguration #inaguration2021 ...

There will be a produce give away at the Shaker Heights Public Library today from 11:00 am - 12:30 pm in honor of MLK Day. Please share this information with anyone you know who is suffering from food insecurity. ...

Our Martin Luther King Day of Service will begin soon at 9:30 AM, help us honor the legacy of Dr. King and participate in this reimagined day of service. We will all gather on Zoom to hear prayer and reflection, an inspirational word from Pastor Burris, and to receive directions for the activities of the day.
After our 30-minute Zoom connection, each person will be asked to contact people (church members, neighbors, friends, and/or family members) who are in isolation or need a word of encouragement. You may call, send a card, text, or email to make contact. The goal is to make connections and establish bridges to offer support and create unity in our community.
Each participant is encouraged to identify a charity/organization that they feel makes a positive impact on the community. Prior to joining the call, please share the name of your charity of choice with Rev. Sandra Alexander through the form below. At the end of the day, through a drawing, there will be an opportunity for everyone who participated to receive a donation designated for their charity of choice.
Join our Zoom MLK Meeting
zoom.us/j/95481897071...
Meeting ID: 954 8189 7071
Passcode: 364670
If you would prefer to dial-in, use one of the following numbers:
+1 312 626 6799 US (Chicago)
or
+1 929 205 6099 US (New York)
Meeting ID: 954 8189 7071
Passcode: 364670
More Info > firstbaptistcleveland.org/mlk-day-of-service ...

Coming in a few moments -live stream! Join us and Share! ...

In this morning's message, Mr. Ship Collins will talk about "Honoring a Dream: My Role and Yours" in honor of Martin Luther King Jr. Day. His scripture is 1 ...
View on Facebook
·Share

Our Livestreamed Worship Service will be starting soon at 10AM and we would love for you to join us. www.youtube.com/channel/UCGPcB14N9TRe50jES6uHK7Q/live
In this morning's message, Mr. Ship Collins will talk about "Honoring a Dream: My Role and Yours" in honor of Martin Luther King Jr. Day. His scripture is 1 Corinthians 14:10. The service features a blend of musical styles, from traditional with organ to contemporary music with a praise band and singers. Alona Miller will play "Dear Theodosia" on her guitar for the prelude. ...