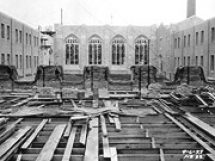 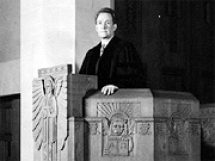 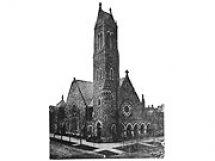 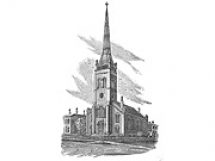 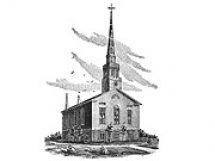 On January 13, 1833, a small group of Baptists met at the frozen shore of Lake Erie, cut a hole in the ice, and witnessed the baptism of four people.  The next month the First Baptist church was organized by seventeen members.  At first they rented a school house at St. Clair and West 6th; two years later they had built, near today’s Public Square, a small church building for $18,000.  In 1855, the growing membership moved into a larger building at Euclid and East 9th.  By 1899, this building being outgrown, the members united with the Idaka Chapel and a third edifice was erected at 46th and Prospect, where they worshipped for 40 years.

During all these years, groups of members were dismissed to form new Baptist churches or missions in greater Cleveland, including Euclid Avenue Baptist, Willson Avenue, Superior Avenue, Trinity, Church of the Master and East Cleveland.

Responsive to the movement of its members eastward, the church united with the Cleveland Heights Baptist Church, and in June 1929, the present building was dedicated on an eight-acre site at Fairmount and Eaton. Dr. Harold Cooke Phillips began a 30 year ministry which became a vital Christian influence in the local church, the denomination, universities and seminaries, and indeed, the world.

This beautiful Gothic building, rich in Christian symbols and carvings, a bell tower, and stained glass windows, was expanded in 1958 with the addition of a Christian Education wing.  Internal modifications are ongoing, to accommodate a changing ministry.

From its inception, the church has placed much emphasis on mission.  At one period, the membership included five foreign missionaries, and for many years the church headed the list of those giving to mission in the American Baptist Churches, USA.  First Baptist has also supported many individual endeavors, as well as schools, seminaries, and hospitals at the local, national and international levels.  After World War 8 families were sponsored in resettlement programs.  The work of resettling refugees has continued.

For nearly 40 years, First Baptist has been one of the key supporters of an American Baptist Mission endeavor in Nicaragua, which has developed a program of training and supporting villagers in the rural regions of the country to provide basic preventative and corrective medical care.  The work was begun by members Gustavo and Joan Parajon, who continue in the ministry today along with their son and daughter in law, Drs, David and Laura Parajon.  In the 40 years, over 500 people from First Baptist have gone to Nicaragua on an annual two week mission trip.

In Cleveland the congregation assisted in starting a nursery school at Fidelity Baptist church, and continues as a key supporter of Fidelity’s hunger ministry partly through a garden on the church property which has been producing nearly 2000 pounds of produce annually.  First Baptist members and friends volunteer with a homeless feeding program, The Thelma George Center, Race Track Ministry, Interfaith Hospitality Network’s shelter program, Compassion International and other worthwhile service organizations locally, regionally and internationally.

The congregation worships in two distinctly different worship formats; an informal contemporary style, and a classical tradition worship style.  Both reflect the congregation’s artistic flare, through groups and individuals utilizing their gifts.

First Baptist has a major outreach into the community with an extensive fine arts series which brings special musical and dramatic events into the church; Happy Ending Lyric Players, a community theatre group which has been based in First Baptist for more than 30 years; a new Arts Outreach which hopes to take artistic opportunities more directly to people in the community.  In the 1990s the congregation undertook a project to renovate and expand its sanctuary organ.  With ninety-one ranks controlled from a moveable low-profile console in the chancel, First Baptist is home to one of Ohio’s most versatile and inspiring musical settings.

Small Groups and Fellowship Groups provide opportunities for more personal contact, study, prayer and care from other members of the congregation.

In addition to First Baptist’s more traditional ministry with children and youth, the congregation’s Children’s Center ministers to the families of 130 children from the surrounding community ranging in age from new born through pre-kindergarten.

Each new challenge has brought a new opportunity for service and enrichment of our Christian life together as we move beyond our 181st year of ministry in Cleveland.

To the extent possible under law, Kregg F. Burris has waived all copyright and related or neighboring rights to Our History. This work is published from: United States.